Who Started The War of Five Kings in Game of Thrones? 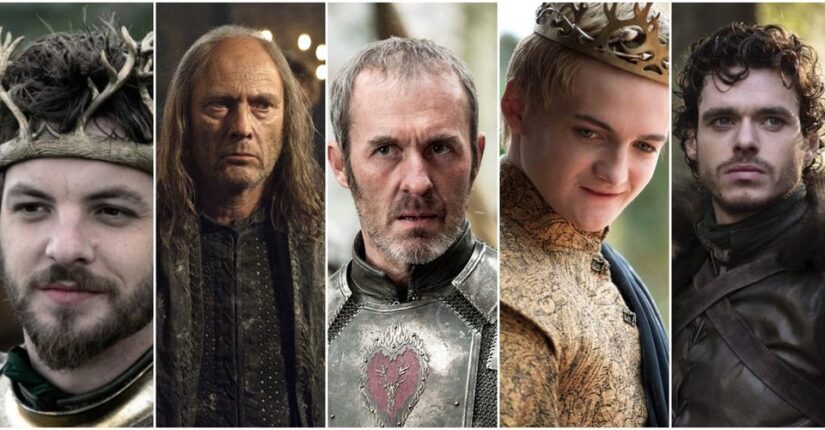 You either win or die in Game of Thrones, but who made the initial move? On a basic level, Game of Thrones revolves around two major wars. The first is the struggle between the living and the dead, which was written in the stars many years ago, and the second is the War of the Five Kings, which dominates HBO’s phenomenally successful TV series.

Game of Thrones follows a war for control of the Iron Throne and, by extension, all of Westeros, but as the story unfolds, more conspirators emerge from the shadows and hidden intentions are revealed in dramatic fashion. The War of the Five Kings is the name given to these events, albeit the name is misleading. The title alludes to Joffrey, Stannis, and Renly Baratheon, who all believed they were King Robert’s legitimate successors. Robb Stark and Balon Greyjoy are the only two survivors, having declared sovereignty over their own realms, the North and the Iron Islands, respectively. The Lannister dynasty, the Tyrells, Daenerys Targaryen, and others were all fighting for the throne, making the War of the Five Kings far more complicated than its name suggests.

Game of Thrones doesn’t properly address who started the conflict in the first place, in between the beheadings and brothel visits. There have been theories and charges about which of the many characters launched the “game of thrones,” and one villain has even been placed on trial, but the true perpetrator remains a mystery. In HBO’s Game of Thrones, these are the people who could be blamed for the War of the Five Kings.

Petyr “Littlefinger” Baelish was the one who discovered a match during the War of the Five Kings, which was a powder keg of political hatred and family strife. Littlefinger started from humble beginnings in King’s Landing, ascending to a position of relative prominence via his own clever wit. Unfortunately for Westeros, Baelish had bigger plans, and he wasn’t going to stop until his rear was lovingly caressing the Iron Throne’s seat. Littlefinger orders the poisoning of Jon Arryn, then Hand of the King, in the Game of Thrones TV series, and blames the Lannisters for the assassination. Arryn’s killing sets off a chain reaction that pits the lion of House Lannister against the wolf of House Stark. Littlefinger makes Tyrion Lannister take the fall for attempting to murder young Bran Stark in season 1 just to make sure the massacre goes as planned.

Having children with a sibling is a bad idea at any time, but incest seems more foolish when you’re married to the king. Cersei Lannister may have been Robert Baratheon’s queen, but she lost interest in him once their only true child died in infancy. Cersei and her brother Jaime would then have three children, always claiming that these blond Lannister doppelgangers were Robert’s. Cersei and Jaime’s love was undeniably genuine, and their incest was motivated by emotional motives rather than a desire to retain a pure bloodline in order to consolidate political power. Nonetheless, Cersei and Jaime’s misdeeds produced instability in King’s Landing, piqued Jon Arryn’s suspicions, and provided Littlefinger with the gasoline he needed to wage a war. Jaime tossed Bran Stark out of a tower window after he witnessed the ruthless Lannisters at Winterfell, giving Littlefinger another chance to stir up conflict between the families. Jaime and Cersei later arrested Ned Stark in order to conceal their secret, taking yet another long-legged stride toward conflict.

Who better to blame for the Five Kings War than the man they were attempting to replace? While the king cannot be blamed for his death, he can be accused of being a lousy ruler. King Robert, who had been unfaithful and inattentive to Cersei, pushed her back into the arms of her brother, resulting in an incestuous line of descendants. Robert Baratheon was a poor leader who was more interested with his extravagant lifestyle than with becoming a good king. If Robert had paid closer attention to his court, he might have seen the mounting tensions and building hostilities and intervened before war broke out.

Some argue that Ned Stark’s entire purpose as a character is to show how unwavering commitment to justice and honor does not always result in positive outcomes. Ned Stark follows up Jon Arryn’s research into Cersei’s children in his final days as the Hand of the King, and comes to the same frightening conclusion. Ned does the proper thing by the letter of the law, telling the next in line to the throne of Robert’s absence of legal children. While few would argue that Ned should have carried House Lannister’s secret to the grave, his actions may have been better planned. Ned not only got himself killed and sparked a war between Winterfell and King’s Landing by hurrying to tell the truth, but he also spurred the Baratheon brothers to join the conflict.

Who Was Really to Blame?

The War of the Five Kings in Game of Thrones, like many real-world battles, was the culmination of decades of blunders and resentments. Prior to the start of the novel, both Aerys and Robert made mistakes that impacted history for the worse laid the stage for an almost unavoidable battle. Cersei, Jaime, Joffrey, and Renly, for example, all took decisions that drove Westeros closer to the edge, whereas Ned’s values just got the better of him. However, war was never the desired conclusion in any of these circumstances. Aerys wanted to maintain his power, and Robert believed he was fighting for a good cause, but neither of them could have predicted the War of the Five Kings. Cersei and Jaime would have been content to preserve their secret and keep things as they were, whereas King Joffrey had no plans beyond the next five minutes. Renly, on the other hand, was convinced that he would be a better ruler than Stannis.

Littlefinger is the odd man out. Petyr Baelish, unlike his opponents, prepared for war and coerced circumstances to bring up broad warfare. Littlefinger wasn’t the only one whose ultimate goal was to sit on the Iron Throne, but he was the only one who wanted war to happen. Littlefinger’s imprints are all over the Game of Thrones when it came to making the first move. He may not have put up the board, and he certainly didn’t stick around to play the game, but when it came to making the first move, Littlefinger’s imprints are all over. And all round of those TV series you can watch at 123Movies.